“Sometimes Pig Iron plays with subtle acting states, looking for a way to sensitize audiences to moments of life which are almost invisible. That’s what Toshiki Okada does, he makes the invisible visible. And that’s why we’re drawn to him.” Dan Rothenberg, director of Zero Cost House

“One of the few groups successfully taking theater in new directions.” The New York Times

A dream of radical change, thinks Toshiki Okada, reading Walden from his home in Tokyo. A beautiful book, but only a dream. Then 3/11 happens—those numbers will, for a generation of Japanese people, stand in for the earthquake, tsunami, and subsequent nuclear disaster at Fukushima. In Tokyo, “unconfirmed” urban radiation levels are reported and milk is removed from supermarket shelves. In this atmosphere of deadly weirdness an architect who studies the homes of the homeless declares himself Prime Minister of Japan from his artist’s refuge in Kumamoto, far outside the city in Western Japan. For Toshiki, the Walden fantasy is becoming a necessity.
Bring Toshiki Okada’s sly, personal, and idiosyncratic writing together with Pig Iron’s raucous performance spirit, and you have Zero Cost House, a time- and space-bending autobiographical production about drastic relocations, rereading Walden, remaking government, and the freedom and heaviness of that moment when what’s impossible becomes concrete.

Pig Iron Theatre Company is one of America’s most inventive and successful physical theater companies. For Zero Cost House, company members traveled to Japan and spent weeks training in the unique movement style of the show’s author Toshiki Okada. Okada is a much heralded Japanese playwright-director, whose work Hot Pepper, Air Conditioner, and the Farewell Speech is also being shown at this year’s festival. Pig Iron is the first English-language company to premiere Okada’s work. Previous Live Arts shows include: Twelfth Night, or What You Will (2011), Cankerblossom (2010), Welcome To Yuba City (2009)

The creation of Zero Cost House was funded in part by the Pew Center for Arts and Heritage through the Philadelphia Theatre Initiative; by the MAP Fund, a  program of Creative Capital supported by the Doris Duke Charitable  Foundation and the Rockefeller Foundation; by the Japan Foundation through the Performing Arts JAPAN Program; by the Independence Foundation New Works Initiative; by the Asian Cultural Council; by the National Endowment for the Arts, which believes that a great nation deserves great art; and by the William Penn Foundation. Zero Cost House was developed with support from PlayMakers Repertory  Company, Joseph Haj, producing artistic director. 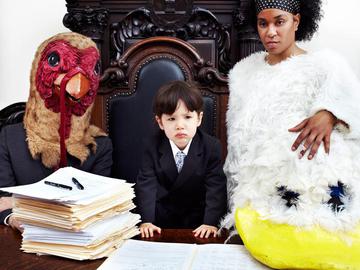