1967 London: the "Summer of Love." Playwright Joe Orton confronts Beatles manager Brian Epstein late at night in a Jewish cemetery. They spar over big ideas and big secrets. When the police arrive, it could mean big trouble! A Philadelphia premiere directed by Liam Castellan.

1967, London: the "Summer of Love". Playwright Joe Orton is hired to rewrite a screenplay for the Beatles. His script (which has "the lads" involved in political assassination, cross-dressing, and group marriage) is rejected as "unsuitable". Within weeks, Joe Orton would be murdered by his disturbed, hammer-wielding boyfriend, and Beatles manager Brian Epstein would be dead of an overdose.

At the start of the play, Orton finds Epstein late at night in a Jewish cemetery and asks, "What's wrong with the script?" They begin to grapple with big ideas and big secrets: being gay in 1960s London (just as it's becoming decriminalized), theatre, music, and what their times mean... or *could* mean. They also have to deal with the force on their rounds: Constable MacDonald, a very Ortonesque policeman obsessed with stamping out vice, and his protege Foster, a lonely widow who needs to work nights, and needs even more to connect with someone else.

The play is by local writer Lindsay Harris Friel, and was developed by Philadelphia Theatre Workshop in 2009. Its world premiere was in an actual graveyard in 2010 by Theatre Pro Rata. 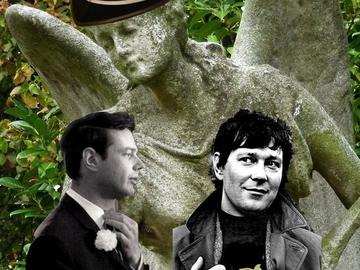