To access the performance venue, patrons must be able to climb a short, but steep, companionway.

Experience Eugene O'Neill's rarest and earliest plays of loneliness and regret, performed aboard Philly's tall ship Gazela at Penn's Landing. Join the crew of the S.S. Glencairn as tensions erupt and every move betrays a thirst for survival. Presented by the PAC of 2012's Fringe hit, Creditors.

Philly’s Tall Ship Gazela is the stage for O’Neill’s rarest and earliest plays of loneliness and regret, The Sea Plays. Join the crew of the S.S. Glencairn below deck, as tensions erupt and every move betrays a thirst for survival.

The leader of the ship’s crew is dying, and below decks the men clash over who will rise in his place. As the ship passes into an active war zone, fear of a spy among the ranks arouses suspicion and violence. Danger mounts as the ship navigates the minefield and the men fight through their own explosive journey. Deep bonds of love are balanced against jealousy and suspicion. Ambition gives way to need for survival.

The Philadelphia Artists’ Collective, founded in 2008 by Damon Bonetti and Dan Hodge, is committed to promoting rarely performed classical plays through workshops and readings in the greater Philadelphia area. It is comprised of a group of performance and visual artists seeking to encourage the development of a common vocabulary and to promote arts awareness within the Philadelphia community. Its past readings and workshops have featured some of the region’s finest artists, and its productions (Duchess of Malfi, Changes of Heart, Creditors, Timon of Athens) have garnered wide audience and critical praise. 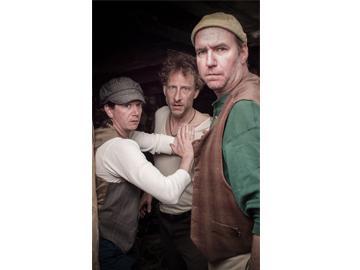 To access the performance venue, patrons must be able to climb a short, but steep, companionway.