“In Pay Up, you are buying, you are choosing, you are getting cheated, you are winning the game. These kinds of emotions turn out to be much more potent than any fiction I can concoct.” Dan Rothenberg, director of Pay Up

"One of the few groups successfully taking theater in new directions." The New York Times

Step into a labyrinthine, choose-your-own adventure about buying and selling everything under the sun. Philadelphia's premier physical theater company re-imagines its 2005 show, post financial crisis style. Part circus, part laboratory experiment, part shopping experience, Pay Up is a pay-as-you-go race against the clock to pick what plays you want to see.

You are given plastic booties, five one-dollar bills, and led into all-white warehouse space that has been converted into eight experimental labs/performance rooms, along with hallways, a gathering space, and backrooms. With a loudspeaker announcing the rules, and at times breaking its own rules, you get six chances to choose one of eight shows, each costing $1. Enter a room, sit in a chair, put headphones on, and watch the show. Repeat. But, choose wisely and make sure you get there before the big buzzer goes off. Or else.

Founded in 1995 as an interdisciplinary ensemble, Pig Iron Theatre Company is dedicated to the creation of new and exuberant performance works that defy easy categorization. In the past 16 years the company has created 24 original works and has toured to festivals and theaters in England, Scotland, Poland, Lithuania, Brazil, Ireland, Italy, Romania and Germany. The body of Pig Iron's work is eclectic and daring. In 2005, Pig Iron won an Obie Award for Hell Meets Henry Halfway, an adaptation of Polish writer Witold Gombrowicz's novel Possessed; in 2008, Pig Iron won a second Obie for James Sugg's performance in Chekhov Lizardbrain. Pig Iron calls itself a “dance-clown-theatre ensemble,”  and their focus moves from character to space to contact with the audience. Individual pieces have been called “soundscape and spectacle,” “cabaret-ballet,” and “avant-garde shadow puppet dessert-theatre.” Pig Iron has a hard time sitting still.

Pay Up has been funded in part by The University of the Arts, and by the Strike While the Iron's Hot Initiative, a matching gifts campaign made possible by the Wyncote Foundation and dedicated to bringing more of Pig Iron's work to Philadelphia audiences in 2013–2015. 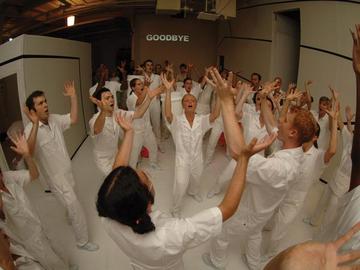 E-Tickets: There are no tickets to pick up. All tickets are sent to you as a link in an email. Tickets are required at the door and need to be scanned before entering. Bring your ticket as a print-out or display the QR code on your mobile device.

No late seating: Entry is not guaranteed after the start time.