Bathtub Moby-Dick by The Renegade Company

Overwhelmed by his troubles, a man reads Melville's novel and begins a journey towards madness in his bathtub. With every page he turns, he begins to believe he is aboard the Pequod and seeks revenge against the Whale. Set in an apartment Renegade creates an immersive audience experience.

Exact venue address will be provided in your ticket confirmation email.

Examining the familiar in unfamiliar ways. The Renegade Company dismantles and deconstructs classic stories, established genres and taboo subject matters to create new theatrical endeavours. This is achieved by local multidisciplinary partnerships and collaborations, forging unconventional relationships between text and presentation, a multi-sensory approach and awareness in design and creation, and a manipulation of expectations. Drawing from a variety of inspirations we hope to create a deeper, resonating audience experience in the greater Philadelphia area and beyond.

The Renegade Company was formed in 2009 and produced a commedia dell’arte style of Alfred Jarry’s French Absurdist Classic, Ubu Roi adapted and directed by Michael Durkin. In the spring of 2011, Renegade produced a folk musical adaptation of Aeschylus’ Prometheus Bound utilizing the music and lyrics of Woody Guthrie and was adapted and directed by Michael Durkin with music by Tabitha Allen. In the fall of 2011 we staged Jessica Dickey’s one-woman show, The Amish Project, Heiner Muller’s Hamletmachine and Medeaplays conceived and directed by Michael Durkin at Underground Arts at the Wolf Building in May 2012. For the 2012-2013 season we we remounted our hit production of The Amish Project with Simpatico Theatre Project in January 2013, and created a work based on Tennessee Williams’ The Glass Menagerie, entitled Glass: Shattered.

We are also committed to collaborations and community connections, past partnerships have included: Curio Theatre Company, Shane Daniels of Oombelico Mask Ensemble, Society Hill Playhouse, Free Library of Philadelphia, David Zercher-Weaver- author of Amish Grace, Villanova University- One Book One Philadelphia, Swarthmore College, Underground Arts at the Wolf Building, and Dr. Shanyn Fiske- Medea scholar. Most currently we’ve collaborated for Glass:Shattered with Dr. David Spolum, film-maker and professor of University of the Arts and Little Baby’s Ice Cream to create a custom flavor incorporated into the production. For Bathtub Moby-Dick we will be collaborating with Wildwood Soapworks and Medicine Womyn Mixology School to create a multisensory experience for the audience. 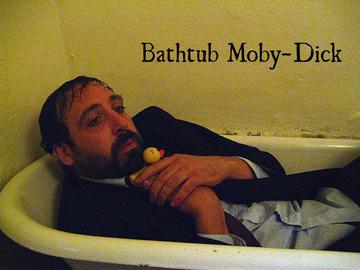